It would be hard to count all of the beautiful beaches Maui has to offer. You can go pretty much anywhere on the island and be within ten minutes of a beach. But we've put together a small list of some of our favorites that come to mind right now.

Starting off this list is the easy to find and well-known Kaanapali Beach. If you're anywhere on the west side of the island and are staying at or near a hotel, it's likely that you'll come across this lovely stretch of sand. Many of the west side's hotels sit on Kaanapali beach and it's among the longest beaches on all of Maui.

One of the great things about this beach (which could also be considered one of its biggest downfalls) is that it is in the middle of everything: restaurants, hotels, shopping. If you're here, you're within walking distance to pretty much anything you could need during the course of your daily lives, aside from some space to yourself. Kaanapali tends to be one of the busier beaches due to all of the hotels around and there will likely be many tourists and locals around.

During whale season, Kaanapali beach is also where you can go to hop on a whale watching tour, which is among our favorite activities during that time of year. There are a handful of activity companies that will beach-load its passengers on Kaanapali beach and you actually board the catamarans by walking into the water about waist deep and then climbing the boat's ladder before it gets underway and you go on your boat ride.

Kaanapali also offers some great snorkeling where you can see all sorts of tropical fish. One of the more well-known spots to go to is a favorite of many locals and tourists, Black Rock. It's not uncommon to come across a turtle foraging for its daily meal on the rocks or to swim into a fish or five around here. And if you're looking for a little excitement, you find one of the more popular activities here by climbing up Black Rock itself and jumping off an approximately thirty-foot cliff into the sparkling blue water below. Visit Youtube for videos of some of the more adventurous tricks and flips locals like to attempt. Whether you're looking to do some acrobatics or just jump off something into the water, playing around by Black Rockc could be a fun way to kill some time or spend the day. Helpful tip; if you're planning a day trip on the beach, make sure you bring some beach chairs. If you are around during sunset as well, almost daily someone performs a ritual of jumping off of Black Rock, diving in after a torch he throws into Maui's ocean.

Just south of sunny Lahaina, you'll come across a little beach park that's great for beginner surfers and families. A great place for a picnic or hanging out with some friends, the park provides grills for that local fish you caught. If you go here on the weekends, get here early as it fills up quickly. Launiupoko is a great spot for beginning surfers as the breaks don't get too terribly big, but be mindful of the coral and of the sea urchins that live on them. You have to get out a ways before you clear much of the coral but it's worth it if you're just learning to ride the waves. Launiupoko is also a great place to catch the sun setting behind the island of Lanai. We've gone there once or twice and built a sand couch to take in the beauty of the sun-silhouetted island in the distance.

Most people pass this beach park without a second thought but it's definitely worth checking out. Right off of the one highway in Lahaina on the way to Kaanapali, Wahikuli beach park offers a few nice little beaches with a path running along the water's edge up to the west side's hotel haven from Lahaina. A trending theme along the shoreline of any part of Maui, it's not uncommon to come across a foraging turtle or two when in the water here. If you don't mind being hearing the rush of cars (and it's easy to just relax forget where you are here), Wahikuli beach park is a nice little spot to be by and in the water.

A definite recommendation, the Black Sand Beach, with its Hawaiian name Pa‘iloa Beach, is one you should check out. Out on the eastern side of the island after the road to Hana or the less traveled back road, you'll find Waianapanapa State Park and its Black Sand Beach. One of a kind, it's a little bit less of a beach as it is a bunch of small pebbles. And sometimes those pebbles aren't so small. That being said, it's safe to say you won't encounter a beach like this many places in the world. Just a side note, this isn't a great snorkel spot, so I wouldn't worry about bringing snorkel gear here.

The waves crashing against the Black Sand Beach is almost hypnotic, as the water knocks thousands of little rocks into each other creating an oddly calming and soothing sound. Walking around on this beach may be uncomfortable at first or if you're there a long time, but for just the right amount of time, walking here comes with a built-in massage on your feet. And you can't dispute the beauty of this unique slice of Hawaii.

Possibly one of the prettiest beaches in the world, the Red Sand Beach (Hawaiian Kaihalulu) is a must-visit. Multiple times. Hidden behind the little town of Hana after the Odyssean-like road that takes you there, to get the Red Sand Beach, you have to hike behind Hana's school. Go figure. You walk down to the water's edge behind a little community center in Hana and follow either the trail that climbs around forty to fifty feet in elevation at some point where you'll eventually reach a bend. Going behind that bend opens up into an amazingly beautiful cove. The Red Sand Beach. One of the most beautiful places in the world. Period.

It's not quite a secret beach, but you won't find nearly as many people out here as you would most of Maui's beaches because of the trek and the drive it takes to get here. If you're lucky, you'll have it to yourself and can truly feel like you're stranded in paradise (in a good way). 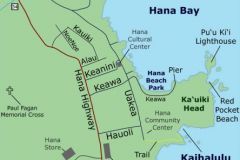 One beach you don't want to miss is Big Beach. To get there, you drive past Kihei and Wailea on the southern side of South Maui. You'll eventually come to a parking lot on the right side and after parking there, will have to walk a couple of hundred feet until you get to a beautiful stretch of sand. Big Beach gives a great view of Molokini crater, a popular snorkeling spot which, unless you're an ironman athlete, you'll have to take a boat out to if you want to check it out. That being said, if you're at Big Beach, you're still in a really pretty place and you probably won't have much motivation to leave. These say it's a great place, but a picture says a thousand words. Here are a couple more words though: Check this place out.

Of the northern end of Big Beach, you can climb a little rock face and if you pop out on the other side, you find Little Beach. But be warned, the beach may be pretty, but not everything you find back there will be. Little Beach is a nude beach. Lots of hippies. Lots of older gentlemen as well. A piece of advice: avoid the one-eyed, one-horned, flying purple people eater. They do exist. You'll find it here. I'll leave it to your imagination.

If you go there on Sundays, there will likely be a drum circle that goes on for most of the day, and at one point, once sunset hits, they used to have community fire dancing. A couple of words of caution though. If you've never fire danced before, it's probably not the smartest thing to start now. These are just people and you're accountable for yourself. Also, for a while, it was a problem that peoples' stuff was getting stolen. While you're distracted from the awesome fire-dancing (or maybe you're just trying to look somewhere that's not at the old guy next to you) someone could be swiping your stuff. So keep an eye on your valuables.

It's hard to stop at five. Here are some more, no less pretty or great than the others.

A great windsurfing beach on the northern side of the island. Check this one out of you are a windsurfer or just want to watch some of those amazing guys and girls who choose to challenge, or join forces with, the wind.

Also on the northern side of the island, right outside of Paia on the road to Hana, a great beach for windsurfing or kiteboarding and home to turtles. Don't be fooled by those boulders on the far end of the beach. Get a little closer and they may just bite you. Just kidding. Maybe. Some turtles get big enough to fool you that they're rocks.

The Kama'ole beaches in Kihei are another set of great beaches to check out. Sometimes windy over there, keep an eye on your stuff in case it might get blown away. You'll probably want a pair of sunglasses too (you can't beat Maui Jims) for when the sand starts flying around. Or if you are trying to keep the sun out of your eyes. Or you just want to look cool.

On the west side of the island past all of the cities going north, you'll come to a beach park called DT Flemings. A little bit out of the way of things, it's a nice beach that not super busy and, unlike a lot of Maui's beaches, has a lifeguard. Great for a picnic, day in the sun, or a nice swim, be careful here in the winter because northern facing edges of the island can get a little chaotic with the weather during that time.

Check slaughterhouse out :). My favorite beach.

A nice and sandy beach which is great for all ages. You don't have to worry much about coral or rocks in the water, accidentally stubbing a toe or foot. It's nice to kind of let the guard down when many of Maui's beaches have the inherent risk of stepping on a sea urchin or slicing your foot on coral (or just destroying Maui's beautiful coral by kicking it. Preserve the beauty.)