This is a great little beach in Lahaina town which is perfect for families. The waves here don't typically get too rough, it's shallow and it's not a hike to get to. The water is easily accessible and a great spot for toddlers and younger kids to play in the water, which is why many local families choose this beach for their family outings.

While there is a considerable amount of coral around here to scope out, it's not the greatest snorkeling spot since it's so shallow.

If you're looking for snorkeling, go around the northern end of Baby Beach to Mala Pier.

Street parking on the southern end

Showers, restrooms on the northern in by Mala Pier

Things to Bring to the Beach

There's a lot of coral around this area, so when you're swimming, be careful when trying to stand up. If you step on the coral at all, it could be a nasty cut, not to mention that it will probably kill the coral.

however, for better snorkeling, go to the northern end: Mala Pier

Fish of many different varieties

Whales further out (during season, which is approximately Dec. 15 to April 15) 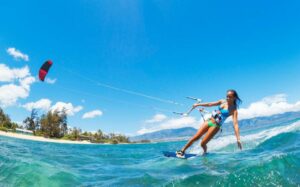